We’re writing to you today to provide insight into the upcoming potential that the Federal Reserve is going to begin tapering (tightening its monetary policy) as early as November of this year. This could prompt a reaction from the markets that results in increased volatility. Find out why below.

Let’s rewind eight years back to the beginning of 2013. We were roughly four years past the end of the Great Recession and the collapse of the housing market. During the previous four years, the Federal Reserve (the central banking system of the United States) provided much-needed stimulus to a failing economy in the form of quantitative easing. Simply put, quantitative easing (QE), is the act of buying financial assets (primarily government bonds) in the hopes of lowering long-term interest rates.

Why would the Federal Reserve want to lower long-term interest rates? Lower rates tend to…

These stimulative effects helped the U.S. economy recover from one of the worst recessions we’ve ever seen.

In early 2013, the Federal Reserve suggested that its quantitative easing program was going to be coming to an end (i.e. tapering—a slow reduction in the number of bonds it was purchasing on a monthly basis). The reaction to this news, resulted in what’s now been dubbed as the Taper Tantrum. Taking away monetary stimulus from a market that had been used to that stimulus for the past five years, resulted in market volatility. Investors across the board were alarmed by this tapering news, and stock and bond prices dropped (i.e. tantrum). 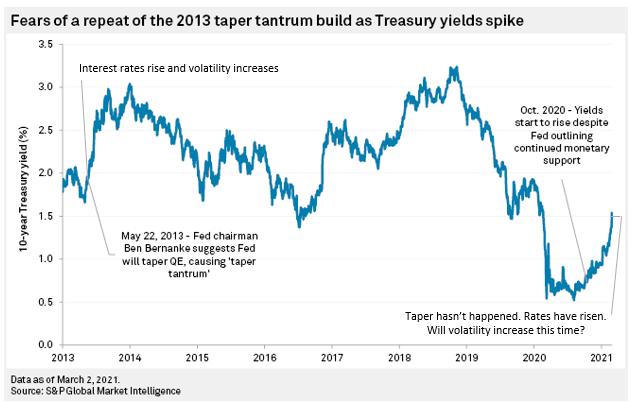 Fast forward to today and we find ourselves in a similar situation. In response to the COVID-19 pandemic, and ensuing recession, the Fed started its newest round of QE in March of 2020. After almost two years of monthly asset purchases (stimulus), there has been talk that the Fed could begin easing its monetary policy as early as November of 2021. If 2013 is any indication of how the market may react to this tapering, we could be headed towards increased volatility.

Below highlight some key stats from these quantitative easing programs:

Looking back on the Taper Tantrum of 2013, the ensuing market reaction turned out to be relatively subtle. The main difference between then and now is we’re starting from a lower interest rate environment, we have a larger deficit, market valuations are much higher, and there continues to be an increase in new COVID-19 cases.

We are Monitoring the Economic Landscape

The investment team at Capital Advantage has already made a tactical shift into an interest rate hedged bond ETF that should perform well if long-term interest rates start to increase. If we see increased market volatility, increasing interest rates, and declining stock/bond prices over the next few months this will come as little surprise. We continue to monitor the economic landscape and this situation very carefully and are here to answer any questions you may have.

Sign up for our monthly newsletter and get the latest financial news, tips, and insights

×
Share this ArticleLike this article? Email it to a friend!
Email sent!