As the bond market drives yields down because of the economic turmoil, mortgage rates moved in concert, dropping below 4% for the first time since January 2018, according to Freddie Mac.

“While economic data points to continued strength, financial sentiment is weakening with the spread between the 10-year and the 3-month Treasury bill narrowing as fears of the impact of the trade war with China grow. Lower rates should, however, give a boost to the housing market, which has been on the upswing with both existing- and new-home sales picking up recently,” Sam Khater, Freddie Mac’s chief economist, said in a press release. 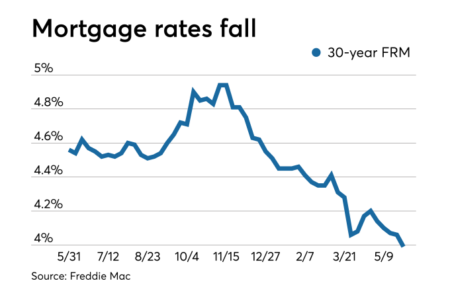 Mortgage rates fell for the week ending May 30, but not as far as expected, Matthew Speakman, an economic analyst at Zillow, said when that company released its rate tracker.

“The yield curve inversion exacerbated the movement of money into the bond market by investors. Even though rates did not fall as much as expected, there are a variety of explanations for this deviation — including conversations having to do with the potential re-privatization of Fannie Mae and Freddie Mac,” Speakman said. “To be sure, yields and rates are still strongly correlated, but given this recent trend, any sharp rebounds in Treasurys will likely only result in subtle increase in rates.”

The Bay Area housing market turned noticeably sluggish during April, according to a report released May 30 that sketched a picture of flat prices and tumbling sales.

The median price in the Bay Area of a previously owned home remained unchanged in April at $900,000, compared with the same month in 2018, according to a report from real estate data firm CoreLogic. Sales of existing homes, though, sagged in the nine-county region, falling 7 percent year-over-year.

Home prices in the Bay Area have flattened out the past few months. In March, a record-breaking, seven-year streak of price gains came to an end.

That same month, home sales hit spring lows not seen for March since 2008. The slow-down in sales started in mid-2018, when more homes started to be put up for sale and prices no longer vaulted to double digit gains.

“There is definitely a rise in inventory, and homes are sitting on the market longer,” said Roxy Laufer, a South Bay residential agent with Sereno Group, a realty firm. “There is less urgency for buyers right now. Buyers have more choices.” That means buyers can be picky.

“It’s still location, location, location,” said Margaret Garber-Teeter, a real estate agent with the Walnut Creek office of Compass, a residential brokerage. Garber-Teeter added, however, that sales prices and the condition of the homes on the market also are crucial factors. “Houses that are in really good, interesting condition and priced within the stats are going out the door with multiple offers,” Garber-Teeter said. “People selling a house at the highest price, or overpriced, flat line out, and they don’t get those multiple offers.”

Prices in April also fell in Marin County, San Francisco and Sonoma County compared with April 2018, according to the CoreLogic report. Napa and Solano counties saw prices rise. “This isn’t really surprising,” said Kevin Swartz, a real estate agent with Sereno Group. “This is what I’m seeing on the local level, which is Sunnyvale and the surrounding cities. Last year, prices went up so high and the buyers took a step back because it just wasn’t affordable.” Plenty of buyers attended open houses in the final few months of 2018, but the tire kicking wasn’t followed up by purchase bids, Swartz observed. “There was a price correction,” Swartz said. “It is not a competitive market right now, so buyers are wondering if prices will continue to go down.”

The economy in the nine-county region remains strong. Over the 12 months that ended in April, the number of jobs in the Bay Area increased 2.5 percent — far ahead of the growth of the California job market of 1.6 percent over the same one-year period. “Interest rates are still great, the economy is still chugging along, the unemployment rate is very low in the Bay Area,” said Will Doerlich, broker-owner of Realty One Group in Livermore and Pleasanton.

Plus, in Doerlich’s view, buyers and sellers now have roughly equal strengths at the negotiating table.“It’s a more balanced, more even market,” Doerlich said. “It’s neither a buyer’s or a seller’s market.”

Buyers might even have a bit of an advantage, in Laufer’s view. “This is the best market that buyers have had for some time in terms of interest rates and inventory,” Laufer said. “More buyers are going to wait for what they want. I’ve seen buyers wait for 18 months or more before they settle on a purchase.”

Prices remain relatively firm for homes in desirable neighborhoods and in good shape and presentable, Swartz said. “Buyers are not purchasing homes that need a lot of work,” Swartz said. “The buyers expect new kitchens and bathrooms, and most sellers aren’t willing to do that. So the sellers have to lower the prices to attract buyers to those homes that need work.”

One East Bay home seeker, Deepa Chordiya, began looking in February for a three- or a four-bedroom home in Union City, hoping to stay within her budget of $700,000. At the outset of the search, she noted not that much inventory on the market and homes seemed priced at discounts from what she would have expected. Chordiya spotted a three-bedroom town-home in Union City listed for $750,000, but that was well above her budget, according to her Fremont-based realty agent, Sunil Sethi. Within weeks though, the sellers dropped the price to $699,000, which wound up being the purchase price for Chordiya, who moved in with her two children. “I was lucky,” Chordiya, 42, said.

What Does the House Retirement Bill Mean for You?

A House bill would make it easier to convert retirement savings into a steady lifetime income.

The retirement bill the House of Representatives passed on May 23 includes an assortment of changes for participants in 401(k) plans and owners of individual retirement accounts. The Senate may be poised to pass the bill, or a similar one, quickly and send it to President Trump, who is expected to sign it. Here’s what you can expect:

It’ll become easier to convert your retirement savings into a steady lifetime income—a feature common to old-fashioned pensions—by buying an annuity in a 401(k)-style retirement plan. Currently, only 9% of employers offer this option, according to Vanguard Group Inc. Employers would be able to choose whether to offer an annuity and, if so, which type to offer.

The bill repeals the age cap for contributing to a traditional IRA, currently 70½, making it easier for people with taxable compensation to continue saving. Also, the age to start taking required taxable withdrawals from 401(k)s and IRAs would increase to 72 from 70½.

The legislation would also make it easier for employees to understand how much monthly income their 401(k) balance would support by requiring employers to disclose an estimate on 401(k) statements.

If you work part time

If you’re a new parent

The bill would allow you to take penalty-free distributions from 401(K)s and IRAs of up to $5,000 within a year of the birth or adoption of a child to cover associated expenses.

If you inherit an IRA

You’d no longer be able to liquidate the balance over your lifetime and stretch out tax payments. Instead, if you inherit tax-advantaged retirement accounts after Dec. 31, 2019, you must withdraw the money within a decade of the IRA owner’s death and pay any taxes due. Exceptions include surviving spouses and minor children.

If you have a 529 savings plan

You’d be able to withdraw as much as $10,000 from a 529 education-savings plan for repayments of some student loans.

If your employer doesn’t offer a retirement plan

An estimated 42% of private-sector workers don’t have access to a workplace retirement-savings plan. Under the bill, employers without retirement plans would have the option to band together to offer a 401(k)-type plan if they choose.