This very high standard deduction means taxpayers who opt to make charitable contributions may not get the additional itemized deductions that they would have in the past, which is frustrating. However, with a little clever planning around charitable giving, taxpayers can create ways to exceed the standard deduction and start itemizing again, which will enable them to lower their tax bill.

Are you interested in giving to charity, but concerned about how the new tax plan limits your ability to deduct those contributions? An old method called “lumping” or “bunching” is making a comeback! This method involves “lumping” two years of charitable and other deductions into one single tax year. For example, if you make charitable donations in January and December of the same year, you may be able to itemize those deductions in that year to exceed the increased standard deduction for that year. The next year, you could take the standard deduction and forgo itemizing. With this method, you would receive a greater tax benefit for the same dollar amount of charitable contributions, just by cleverly timing those contributions. To accomplish this, you just need to think of your tax situation over a two-year period and time your gifts carefully. ®

For example, if Bill’s itemized deductions are $14,000 one year, he would be better off itemizing, as his itemized deductions are $2,000 higher than the standard deduction of $12,000. However, by implementing the “bunching” method and combining two years of charitable contributions into one year, he can automatically receive the standard deduction of $12,000 in one year and then he can simply make two years’ worth of charitable deductions the next year, which would further increase his deductions in that second year. As shown in the table below, by implementing the bunching strategy, Bill can increase his total two-year deductions from $28,000 to $32,000.

Increase Deductions by Bunching Over 2 Years

A recent global survey of more than 18,000 adults in nine countries asked a simple question: “All things considered, do you think the world is getting better or worse, or neither getting better nor worse?” 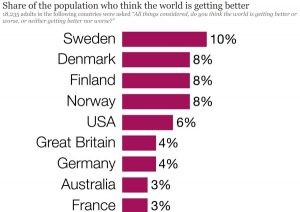 As you can see from the graphic, the most optimistic country, regarding the future, is Sweden, and the depressing news is that only 10% of Swedes think the world is getting better.  It goes down from there; other Norwegian countries come in at 8% optimistic, while 6% of Americans and just 4% of British and German residents think the world is becoming a better place.

As it happens, this small minority is right.  An article in Our World In Data says that if we look back 30 or perhaps 50 years, we can see progress that might not be visible if our time frame is: “since last week.”  The article, in fact, suggests that the world is becoming tremendously better in a variety of ways that are happening too slowly for us to appreciate.

For instance?  The number of people living in extreme poverty—defined as living on less than $1.90 a day, adjusted for different price levels in different countries and for inflation (and also for subsistence farming, where the crops are given equivalent values)—has dropped from almost everybody in 1820 to 44% in 1981, down to fewer than 10% of global citizens in 2015 (the last year for which we currently have data).  Isn’t that remarkable progress?

Another measure is literacy.  In 1820, only about one person in ten older than 15 years could read and write.  In 1930, the number was around 33%.  Now, globally, 85% of our world citizens can read and write in their own language, and of course many people are now fluent in multiple languages.

When looking at health, the researchers say that we cannot appreciate how much better the world has gotten until we fully appreciate how terrible the past was.  In 1800, about 43% of the world’s newborn babies died before their 5th birthday.  Since then, we have enjoyed better housing and sanitation, better nutrition and more available food (which also made us smarter and taller), plus the germ theory of medicine, antibiotics and vaccines.  Today, only 4.3% of newborns die before the age of 5.

The article also considers political freedom, which has shifted from virtually everybody living in colonial regimes or autocracies in 1900 to virtually everybody (except the Chinese and a few holdouts like North Korea, Iran and Saudi Arabia) living under a republican form of government today.  Educational opportunities are far more widespread today than they were even 50 years ago around the globe, and in general the world is healthier, richer, smarter and wealthier.

Not understanding this enormous progress means that we don’t understand our own history very well—and, the article suggests, this robs us of a positive outlook on ourselves and the future.  We should have more faith in ourselves; despite the obvious setbacks and speed bumps, the human species seems to be doing a great job of improving its conditions and making the world a better place.

Each year, thousands of professionals use their creativity and ingenuity to try to figure out the best ways to lower your federal taxes.  You know you’re living in interesting times when state lawmakers join that crowd.

The reason they’re working so hard is something popularly known as the SALT provisions of the new Tax Cuts + Jobs Act, which set a firm $10,000 limit on the deductibility of state and local taxes.  That limit isn’t such a big deal for residents of Texas or Florida, and other states that don’t collect income taxes.  But people living in New York, New Jersey, Connecticut and California generally pay far more than $10,000 to the state alone, on top of the property and municipal taxes they’re assessed.

Those higher-tax states are now using that aforementioned creativity and ingenuity to help their citizens get back those deductions—and some of the proposed solutions are indeed quite creative.  For instance, New York has already begun allowing taxpayers to, instead of paying their local property taxes, simply make a comparable charitable contribution to a charity set up by their local school district.  Presto!  What used to be a tax is now a charitable contribution that would be deductible for taxpayers who itemize.  The state would also allow New York City and other municipalities to set up their own charitable trusts, converting local taxes into deductible charitable contributions as well.

Not to be outdone, New Jersey and Connecticut are attempting to reclassify state taxes as charitable contributions, while New York plans to allow taxpayers to convert their state income tax into a payroll tax, which their employers would pay on their behalf—and then deduct from their federal tax bill.

Even more creative: California’s Senate Bill 227 would create something called the “California Excellence Fund,” which would provide a credit against state income tax liability for any contributions to the fund—effectively recharacterizing as much of the state tax liability as the resident wants into deductible charitable donations.  Similar legislation has been introduced in Illinois, Nebraska and Virginia.  In Washington state, which doesn’t levy an income tax, a copycat bill would let taxpayers make charitable contributions to the state and receive a sales tax exemption certificate in return.

The most complicated solution is being proposed in Connecticut, whose legislature is finalizing a bill that would impose an “entity-level” tax on pass-through companies like Subchapter S corporations and LLCs—entities which normally are only taxed at the shareholder level.  (Hence the name “pass-through.”) Those entity-level taxes would be deductible by the S corp. or LLC, and the state would issue an offsetting individual income tax credit to shareholders of the entity.  Presto!  The state income tax becomes deductible at the company level, and the individual’s state income tax obligation goes away.  Connecticut’s Department of Revenue Services estimates that this provision would recover $600 million in otherwise-lost SALT deductions for state residents in the first year alone.

Is any of this legal?  We don’t know yet.  The IRS has recently issued a broad warning against states’ creative use of charitable contributions, and it never helps a future tax court case when lawmakers openly tout their intentions to evade the federal SALT provisions when they introduce state legislation.  But tax experts note that the IRS has provided favorable rulings in more narrow cases regarding the federal deductibility of state tax credits in 33 states.

For instance, Alabama has, for years, provided a 100% state tax credit for taxpayers who donate money to organizations that give children vouchers to attend private school.  New York’s new SALT-related provision would give an 85% state tax credit to residents who donate to a local charitable fund that supports education.  Is one legit but the other not?